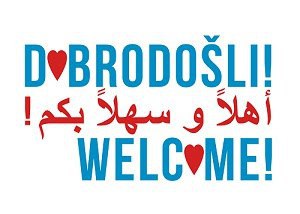 Following the publication of photos of refugees physically marked by the Croatian police with orange crosses sprayed all over the top of their heads, the Guardian published an article 1)https://www.theguardian.com/global-development/2020/may/12/croatian-police-accused-of-shaving-and-spray-painting-heads-of-asylum-seekers?fbclid=IwAR3UbJnUhvcp9OX-2-b29ws6akaNLwRR_APD_fzTA3R_Vw5uSyNXhu6yAZ0 about this humiliating practice. The UNHCR Croatia asked the Croatian government to investigate all allegations of rights violations and abuse of refugees and urged the setting up of an independent monitoring mechanism to „establish the factual situation at the borders“. While criticism of this humiliating case has not abated, the Ministry of the Interior published their reaction2)https://mup.gov.hr/vijesti/reagiranje-mup-a-na-clanak-britanskog-portala-the-guardian/286198 to the Guardian article, in which MoIonce again opted for tactics of publicly discrediting the work of journalists and of the organizations No Name Kitchen 3)https://www.nonamekitchen.org/en/ and Border Violence Monitoring Network 4)https://www.google.com/search?q=border+violence+monitoring+network&amp;oq=Border+violence+&amp;aqs=chrome.0.69i59j69i57j69i59l2j0j69i60l3.3120j0j4&amp;sourceid=chrome&amp;ie=UTF-8, which have been warning about police violence against refugees occurring at the borders and within the territory of the Republic of Croatia. Border Violence Monitoring Network in its commentary 5)https://www.borderviolence.eu/discrediting-ngos-will-not-hide-the-evidence-at-the-eus-external-borders/?fbclid=IwAR0K_qB0-6jS3IoEncCZ6RlQL-lNr_sDfIfACy0faUB4Y_SjvPnGjDTva8s on the MOI’s reaction points out that with a complete lack of transparency and the inability to prove their statements, the MOI uses defamation of independent observers as a means of diverting attention from crimes violating the majority of national and international laws. The Welcome Initiative points out that it is the time for the Ministry of the Interior to take responsibility and start conducting efficient and high-quality internal investigations.

The new Border Violence Monitoring Network’s report 6)https://www.borderviolence.eu/special-report-covid-19-and-border-violence-along-the-balkan-route/ confirms that violence and degrading treatment haven’t stopped even during the COVID-19 pandemic. Across the whole region, refugees face dehumanizing treatment by the authorities and institutions/organisations in charge of their care. Refugees who are currently in Bosnia and Herzegovina have already criticized the International Organization for Migration (IOM) for food shortages and starvation. According to the Transbalkan Solidarity collective, mass food poisoning 7)https://m.facebook.com/story.php?story_fbid=137701367846853&amp;id=102671291349861 was recorded this week in the Lipa refugee camp. The Red Cross and IOM are in charge of food at the camp. Refugees stated that they were served spoiled food on Sunday, and about 30 people vomited, after which they sought medical help.

In Serbia, refugees and organizations are witnessing the excessive use of detention. Refugees placed in refugee camps were not allowed to leave the camps for 60 days. A group of organizations submitted 9)http://www.bgcentar.org.rs/inicijativa-ustavnom-sudu-za-ocenu-ustavnosti-i-zakonitosti-naredbe-o-ogranicenju-kretanja-na-prilazima-otvorenom-prostoru-i-objektima-prihvatnih-centara-za-migrante-i-centara-za-azil/?fbclid=IwAR0gO3A1PAme97BDktsH4B2Sz_yyLOgvm5XG-qUrDgpn-5qwOoAKBFj8hGU a proposal to the Constitutional Court of the Republic of Serbia to assess the constitutionality and legality of the Order on the Restriction of Movement at the open areas and facilities of reception centres for migrants and asylum centres. As the Belgrade Centre for Human Rights reports 10)https://www.facebook.com/BGcentarzaljudskaprava/photos/a.325156250830251/3298855583460288/?type=3&amp;theater, in the meantime, the Minister of Health repealed this Order.

The issue of refugee detention in Hungary was addressed this week by the European Court of Justice (ECJ). The court ruled 11)https://www.helsinki.hu/en/hungary-unlawfully-detains-people-in-the-transit-zone/?fbclid=IwAR2IMpSpkbrgLhgDIrEgL-Q-lbMEJEg33J3Ovxg9Rsmw2wjK0tAp-bSlZHU that the refugees placed in the so-called transit zones are actually in illegal detention.

After an investigation 12)https://forensic-architecture.org/investigation/the-killing-of-muhammad-gulzar by Forensic Architecture revealed that Greek authorities shot Muhammad Gulzar during the riots on the Greek-Turkish border, 100 Members of the European Parliament signed a request for an investigation 13)https://mobile.twitter.com/Tineke_Strik/status/1260177579815899137/photo/1 into the events on the Greek-Turkish border to be conducted by the European Commission. And that the EU policy is primarily dedicated to discouraging and expelling people who are looking for security from the moment they arrive at the EU is confirmed by the report 14)http://www.statewatch.org/news/2020/may/eu-council-unremovable-migrants.htm published during the Croatian presidency of the EU Council.

The report, instead of advocating for human security, states that the greatest importance should be given to the return of persons whose status is not regulated, to their home countries. Also, it is pointed out, the measures that could enable the regularization of the status can become the so-called „pull factor“, and that it is important to „constantly encourage people to return to their home countries“. The Welcome Initiative emphasizes that the priority should be to create a common European asylum system through which the EU member states will share responsibility for the people at its doorstep, but also to stop the harmful EU treaties that externalize migration and condemn people to live in insecurity.

In the conclusion of this week’s report, we are referring to two positive news:

the first is the good practice of the Portuguese authorities, who have announced 15)https://www.reuters.com/article/us-health-coronavirus-portugal-migrants-idUSKBN22O30D?taid=5ebb315553cb5e0001390e71&amp;utm_campaign=trueAnthem:+Trending+Content&amp;utm_medium=trueAnthem&amp;utm_source=twitter&amp;fbclid=IwAR3qhjlSn45VO0khN8rVJ3zTqHlNFGysaYXHsotfgx-LyPN2KH59FAs2J-8 that they will relocate 500 unaccompanied minors from Greece. If all the Member States of the European Union followed the practice of Portugal, the Greek islands would no longer be places where children lose the carefreeness of their childhood.

The second news 16)https://www.lemonde.fr/societe/article/2020/05/13/symbole-de-l-aide-aux-migrants-cedric-herrou-relaxe-par-la-cour-d-appel-de-lyon_6039555_3224.html comes to us from France where, after a long struggle, the appellate court dismissed all charges against the French activist and farmer Cédric Herrou who selflessly helped refugees by accepting them into his home. Cédric has become a global symbol of the fight against the criminalization of solidarity and the movement to assist refugees, guided by the value of brotherhood among people.

Balkanroute: Report Referring to the Period from 11th to 17th of May