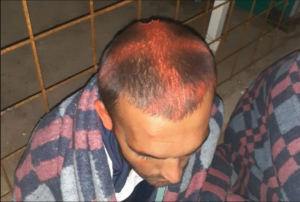 Croatian police are allegedly spray-painting the heads of asylum seekers with crosses when they attempt to cross the border from Bosnia.

The Guardian has obtained a number of photographs of what has been described by charities as the “latest humiliation’’ perpetrated by the Croatian authorities against migrants travelling along the Balkan route. […]

“It is obvious that one of the intended effects of this behaviour is to humiliate refugees and migrants attempting to cross the border,” said Jack Sapoch from No Name Kitchen (NNK), an NGO that operates in Velika Kladuša, 2km from the border, and is a member of watchdog organisation the Border Violence Monitoring Network.

“As far as I see it, this is the result of either one of two motivations. Either the Croatian authorities committing these acts are using spray paint to identify and humiliate repeat border crossers or, more worryingly, they are using this as a tactic to psychologically traumatise these men – the majority of whom are Muslim – with a religious symbol,” Sapoch said.

Illegal expulsions of refugees and migrants from the Croatian territory reached a new level this week. According to the latest testimonies and photographs, the police have been humiliating people while pushing them back over the green border, physically marking them with orange cross signs sprayed over the tops of their heads. Unfortunately, such markings can only remind us of the worst, and precisely in the week in which we mark the 75th anniversary of Victory Day.

Moreover, BH NGOs have attested that over the past weekend, on Saturday night, there has been an illegal expulsion of 9 people from Pakistan and Afghanistan, two of them unaccompanied children, in the immediate vicinity of the Glinice village (Velika Kladuša), right next to the Croatian border. The people in question have reported that the Croatian police also shot at them.

An investigation into the death of the 53-year-old Ahmed Mahmoud Omar is ongoing. Omar died last weekend in a Sarajevo hospital, from wounds sustained in the Ušivak reception centre in late March. The inquiry has not yet been completed and the circumstances are not yet entirely clear, but according to a statement by the IOM director for BH, Peter van der Auweaert, the Sarajevo Cantonal Prosecutor is conducting an investigation. Statements have been taken from witnesses – the family, as well as other residents of Ušivak who were involved in the brawl. Information about the case, as well as claims as to the involvement of the security staff in the fight, was given to the Prosecutor’s office by IOM employees, witnesses and the deceased’s family.