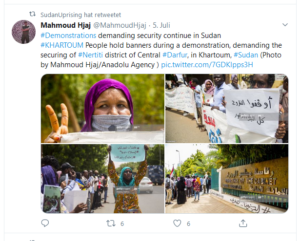 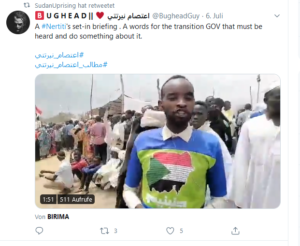 Thousands of people have joined a sit-down protest in front of local authority buildings in Central Darfur demanding action against the armed groups that patrol the region.
A large number of women have joined the first peaceful demonstration – now in its second week – in Nertiti county since war erupted in 2003.
Some of the women, with children on their backs, carry food on their heads to feed the protesters, who want the military governor removed from office and replaced by a civilian. They also want to see an end to attacks on civilians, the prosecution of perpetrators of violence and access to land taken from them by armed settlers, backed by the government of Omar al-Bashir.
In the past four weeks, the Darfur Bar Association said it had registered 48 cases of violence against civilians in Nertiti and surrounding areas.
A delegation from the government in Khartoum visited the protest camp and has promised to address the issues.
But protesters say they will not leave until the government acts on all their demands. “We will stay here even for a year if what we are looking for is not actually met,” said Abudlmukaram Adam, a protester and lawyer from Nertiti.

The delegation from the federal government in Khartoum currently visiting Nierteti in Central Darfur to discuss the demands of the sit-in in the town, has reached an agreement with the protest leaders.
The delegation that includes Sovereign Council member Mohamed El Taayshi, and a number of ministers responded positively to most of the demands of the Nierteti sit-in committee. The protest leaders have said the sit-in will be continued until their demands are actually fulfilled in practice.
On July 5, people set up a sit-in in Nierteti, in protest against the rampant insecurity in the locality. They blame the director of the locality, the chief of police, and the commanders of the army, the security forces, and the paramilitary Rapid Support Forces in the area for failing to protect them, and demand their dismissal.
They further demand the protection of farmers from attacks by militant herders and other gunmen, the opening of pasture tracks to avoid friction between herders and farmers, the return of the livestock stolen during the past two months, the arrest of perpetrators of attacks, disarmament of the bandits in the area, retribution for the victims, and a ban on motorcycles in the locality.
In the presence of the members of the delegation, protest leader Dr Yasir told the people at the sit-in that the federal government will replace the acting military state governors by civilian governors within two weeks, and that the director and police chief of the locality, and the commanders of the General Intelligence Service (GIS) and the commander of the paramilitary Rapid Support Forces (RSF) in the area will be dismissed.

Joint force
A joint army, RSF and police force will be formed, of 100 RSF vehicles, 42 from the army, and some police vehicles.
The tasks of the joint force will be confined to evacuating settlers from the agricultural lands in the south-western parts of Jebel Marra, disarming gunmen, and collecting motorcycles, as well as arresting people against whom complaints had been filed, and securing the agricultural season.
In the past 10 years, herders from countries west of Sudan were invited by the government of President Omar Al Bashir, ousted in April last year, to inhabit the areas where Darfuri farmers used to live before the war in Darfur broke out. Government militias protected these settlers in Darfur for years.
The government delegation and the Nierteti protestors also agreed to establish a public court and appoint three public prosecutors, to enhance the Rule of Law in the locality. The building of the Nierteti prison will be completed.

Traditional mining
Dr Yasir further reported that the delegation from Khartoum agreed to arrange traditional mining under the supervision of the Sudan Mineral Resources Company. A new chief of police will arrive in Nierteti within two weeks.
Water and electricity services will be improved during the implementation of the Darfur Reconstruction Project agreed on during the peace negotiations between the Sudanese government and the rebel movements. The Rapid Support Forces donated a generator to Nierteti town.

Telecoms
Telecommunication companies will arrive in the region within two weeks, to conduct studies concerning the establishment of mobile networks.
As for the environment, the cutting of trees will only take place after permission.
The protest leader said as well that humanitarian organisations are welcome in the locality.
Minister of Culture and Information Feisal Mohamed Saleh lauded the people at the sit-in for their “peaceful and democratic struggle” and praised the organisers for their “sophisticated way” of dealing with the problems in the area.
“Any citizen has the right to peacefully demand their rights,” he said. “This way of peaceful struggle will lead to the country’s development. The government is ready to reach all those with such demands.”

Sit-in praised
Member of the Sovereign Council Mohamed El Taayshi and Minister of Justice Nasreldin Abdelbari as well praised the way the sit-in is organised.
El Taayshi welcomed the many women taking part in the sit-in, praising the role of women in Darfur society. The Nierteti protest “has laid a solid foundation for peaceful civil struggle,” he stated. Abdelbari emphasised the need to disarm militants in the region.
Minister of Labour and Social Welfare Lina El Sheikh announced a national plan to combat violence against women.
“We must ensure that women feel safe when they go out farming,” she said. The minister further stressed the importance of the rights of children and youth.
Yesterday, people from Nierteti living in Khartoum organised a solidarity vigil in front of the Council of Ministers.
Participants in the protest, accompanied by members of resistance committees active in the neighbourhoods of the city, carried banners demanding an immediate response to the demands of the Nierteti sit-in.