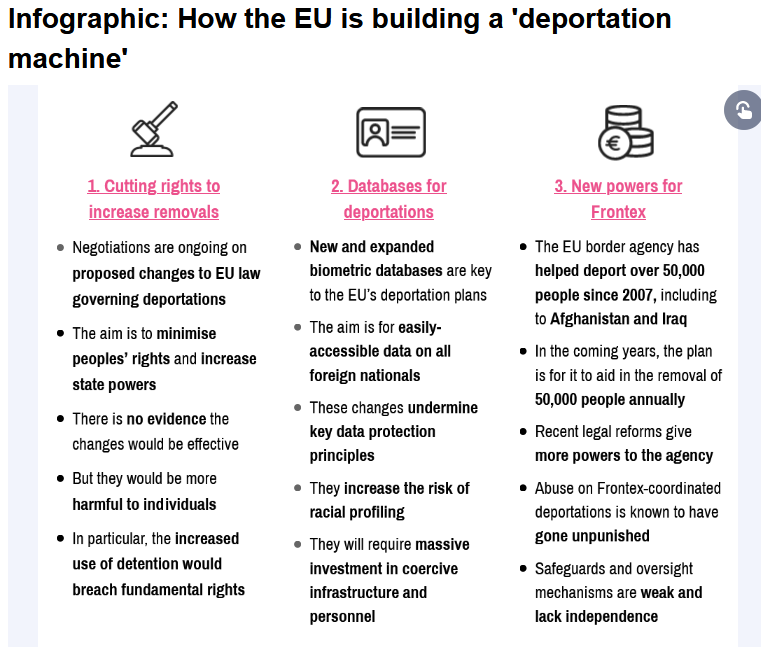 Deportation Union provides a critical examination of recently-introduced and forthcoming EU measures designed to increase the number of deportations carried out by national authorities and the European Border and Coast Guard Agency, Frontex. It focuses on three key areas: attempts to reduce or eliminate rights and protections in the law governing deportations; the expansion and interconnection of EU databases and information systems; and the increased budget, powers and personnel awarded to Frontex.

There has long-been coordinated policy, legal and operational action on migration at EU level, and efforts to increase deportations have always been a part of this. However, since the ‘migration crisis’ of 2015 there has been a rapid increase in new initiatives, the overall aim of which is to limit legal protections afforded to ‘deportable’ individuals at the same time as expanding the ability of national and EU authorities to track, detain and remove people with increasing efficiency.

The measures and initiatives being introduced by the EU to scale up deportations will require massive public expenditure on technology, infrastructure and personnel; the strengthening and expansion of state and supranational agencies already-lacking in transparency and democratic accountability; and are likely to further undermine claims that the EU occupies the moral high ground in its treatment of migrants. Anyone wishing to question and challenge these developments will first need to understand them. This report attempts to go some way towards assisting with that task.