The HRW report on Libya starts with quotations of a migrant who was in the al-Karareem detention center near Misrata. This is exactly the center where the 144 migrants, rescued on Sunday by the ship Lady Sham were brought to and are suffering now with alltogether 500 people. If you look at the pictures in this report you can imagine why the migrants where crying at the Watch the Med Alarmphone not to be brought back to Libya. Luckily this morning we had contact to some women in this detention center, but as you can read in our latest tweet, it broke down:

Shortly after the military entered the #Misrata prison cell, our contact to the people broke off. We don`t know what happened, but fear their phones were confiscated. We still hope to reestablish contact so that they can report to the world what is happening to them. #Libya

HRW report No Escape from Hell: EU Policies Contribute to Abuse of Migrants in Libya, published on Monday. It’s attached and available online here. The entire report is available in English, Arabic, and Italian. 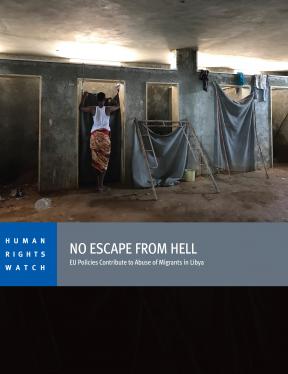 European Union policies contribute to a cycle of extreme abuse against migrants in Libya, Human Rights Watch said in a report released today. The EU and Italy’s support for the Libyan Coast Guard contributes significantly to the interception of migrants and asylum seekers and their subsequent detention in arbitrary, abusive detention in Libya.

The 70-page report, “‘No Escape from Hell’: EU Policies Contribute to Abuse of Migrants in Libya,” documents severe overcrowding, unsanitary conditions, malnutrition, and lack of adequate health care. Human Rights Watch found violent abuse by guards in four official detention centers in western Libya, including beatings and whippings. Human Rights Watch witnessed large numbers of children, including newborns, detained in grossly unsuitable conditions in three out of the four detention centers. Almost 20 percent of those who reached Europe by sea from Libya in 2018 were children.

“Migrants and asylum seekers detained in Libya, including children, are trapped in a nightmare, and what EU governments are doing perpetuates detention instead of getting people out of these abusive conditions,” said Judith Sunderland, associate Europe director at Human Rights Watch. “Fig-leaf efforts to improve conditions and get some people out of detention do not absolve the EU of responsibility for enabling the barbaric detention system in the first place.”

In a letter to Human Rights Watch as the report went to print, the European Commission indicated that its dialogue with Libyan authorities has focused on respect for the human rights of migrants and refugees, that the EU’s engagement in Libya is of a humanitarian nature, and that concrete improvements have been achieved though challenges remain. […]