More than two weeks after an airstrike on a migrant detention centre in Libya’s capital left at least 53 people dead and many more wounded, the UN said that more migrants and refugees are being brought to the Tripoli facility, despite ongoing fighting.

The UN’s International Organisation for Migration (IOM) said in a tweet on Monday that “a new group of migrants” had been taken to the detention centre, Tajoura, adding that the agency “reiterates that migrants’ safety must be guaranteed”.

According to media reports, some 200 people were being held in Tajoura as of Tuesday even though migrants, refugees, and asylum seekers who survived the deadly 2 July strike were released last week. The UN said the strike could constitute a war crime.

midst a growing chorus of appeals to free the approximately 6,000 people known to be held in Libya’s detention centres – long cited for their desperate conditions – aid groups are struggling to support current and former detainees as three-and-a-half months of clashes in and around Tripoli continue, despite calls for de-escalation.

According to information by the UNHCR staff on the 24th of July, 38 refugees are deported to the Tajoura detention camp by the Libyan Coast Guard. Vincent Cochetel, Special Envoy of the UNHCR for the Central Mediterranean situation, and Charlie Yaxley, UNHCR Global Spokesperson for Africa and the Mediterranean/Libya, are reporting on twitter. 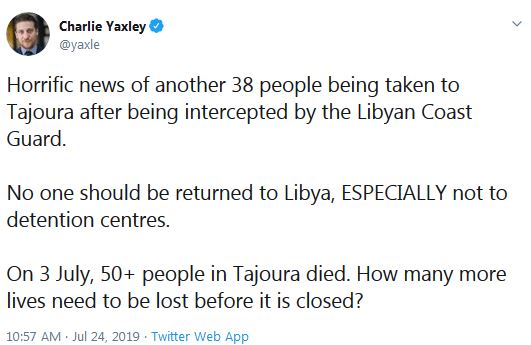 Libya’s coastguard has intercepted a Europe-bound boat off its Mediterranean coast and taken all migrants on board to a detention centre that was bombed earlier this month.

Spokesperson Ayoub Gassim told the Associated Press news agency that a rubber boat carrying 38 people, most of them Egyptians, was stopped on Tuesday 65km northeast of the capital Tripoli.

He added that the migrants were transferred to the Tajoura detention centre.