MADE IN EU: Container(s) of Death

On the occasion of the tragic death of seven young men from Morocco, Algeria and Egypt, whose remains were found on October 23, 2020 in a container for transporting goods in Paraguay.

At the final destination of the shipment, with the bodies of our brothers, arrived the sobs of mothers, the cries of family and friends, the pain of communities around the world. What arrived was complete silence. Dead air across an open container. Someone’s dreams vanished. The hands that had in defense of life shut the container in Šid are now completely unrecognizable. The flesh and bones of those who came seeking freedom of movement remain motionless among pallets of fertilizer. Their struggle for a dignified life, common safety and freedom ended in the eerie sediment of a red cargo container.

But what arrived in Paraguay with the bodies of these young African men was Europe itself. It was the political and economic project that landed in that Paraguayan port – a stronghold, based on the sadistic policies of the European Union, the laws of its member states and its subordinates. What arrived was the regime of death: a scheming and insidious system for hunting human beings with the aid of weaponized surveillance and control institutions, on the pretence of national and citizen security concerns. It is a system which decides whose life is worth living and protecting, and whose is not. What had also arrived in the container are European funds, monetary transactions, budget investments in border militarization, the latest tracking technology, drones, sensors, scanners, field equipment, razor wires, bullets, batons and beatings, and along with them also numerous distinguished delegations, concerned commissions, intergovernmental observers, international agreements and human rights conventions. And yet – nothing. This is not the first violent death. This is not the first such container. Trains from Šid to the West depart on a daily basis. 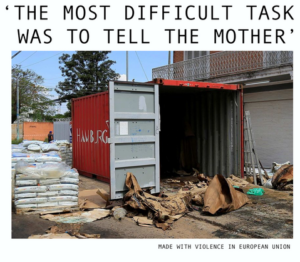 Local ship authorities have confirmed that the red container sailed out from Croatia, a member state of the European Union, whose authorities have slavishly and selfishly implemented the European project of illegalization of freedom of movement, criminalization of poverty and dehumanization of human existence up to the point of ruthless extermination. Faced with survivors’ testimonies, witness statements, reports from activist groups and international humanitarian organizations, media inquiries from local and foreign journalists, Croatian institutions and leaders, just like their European counterpart, continually reject responsibility, deny guilt, and dispute their own participation in this brutality. They lie shamelessly. Although the Croatian state obviously knows and is aware of its participation in crimes against humanity on the Balkan migration route, and the evidence of this is credible, the local media made almost no word about the red container.

What arrived with the bodies of young African men in the red German-brand Hamburg Süd container, owned by the Danish company Maersk, are nationalist and imperialist batterings. It delivered Croatian police brutality to the Western Hemisphere. It brought numerous persecuted people who drowned in Kupa, Mrežnica, Una, Korana, Drina, Sava and the Danube. It arrived with a young mother from Kosovo whose body froze in the snow near Ličko Petrovo Selo. It arrived with young Moroccan men whose burnt bodies were found in the Bajakovo border crossing detention unit. It arrived with the young Afghani men whose bodies suffocated in a tanker in Futog, with a Kurdish father whose body was beaten to death by private security in the Ušivak camp, with a young Moroccan man who suffocated in an attempt to enter Miral camp to take a shower, and with the little girl Madina, whose name will one day stand on Zagreb’s Croatian Republic square. It arrived carrying casualties of train crashes, electric shocks, landslides, falls from cliffs and buildings, fires, car accidents. It arrived with the expelled, the missing and the erased. It arrived with shots, batterings, the wounded, dead, raped, flogged, tortured, hospitalized, operated on, detained, silenced, ridiculed, starved, intimidated and humiliated.

Therefore, we say to you, who pass laws and orders, who set up prisons and concentration camps, who pay jailers and judges, who own forts and state cabinets, who pay priests and professors, who love batons and tanks, who pay for cops and soldiers:

You will not break us!

The communities and movements around the world remain fearless in their efforts and struggle for a post-national society without borders, for a world without capitalism and patriarchy, for environmental justice and the liberation of this planet.

Until complete liberation, eternal glory to the fallen comrades!

MADE IN EU: Container(s) of Death

One thought on “MADE IN EU: Container(s) of Death”