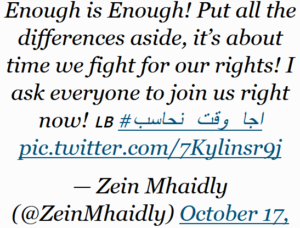 Thousands of Lebanese took to the streets in towns and cities across the country on Thursday, in the biggest protests in years, following the government’s announcement to introduce new taxes.

The intensity of the protests brought into question whether the government, appointed less than a year ago, would survive. […]

The protests come amid a worsening economic and financial crisis in Lebanon that many blame on the small number of sectarian politicians who have ruled the country since its 15-year civil war came to an end in 1990.

They also come just two days after the worst forest fires in more than a decade, causing outrage among citizens who blamed the government’s shortcomings for the scale of the damage. As the ground still smouldered across much of the country Lebanon’s cabinet agreed on Wednesday to impose a $0.20 fee on WhatsApp calls per day, and was debating whether to hike value-added tax from 11 to 15 percent. […]

The country ground to a standstill, with demonstrations from Tripoli and Jbeil in the north to Baalbeck and Taalabaya in the eastern Bekaa Valley and Nabatieh and Tyre in the south.

In Nabatieh, hundreds of men headed to the homes of local parliament members, including Yassine Jaber and Hani Qobeissi of the Amal Movement – headed by Parliament Speaker Nabih Berri – and the leader of Hezbollah’s parliamentary bloc, Mohammad Raad. […]

The nationwide protests begun with just a couple dozen people chanting for revolution in Beirut’s main square. They multiplied into hundreds and then thousands as they marched around the capital’s streets, blocking roads.

For about ten hours, protesters remained on the streets, until they were violently dispersed by baton-wielding riot police, who fired rubber bullets and shot tear gas.

[…] Cities across Lebanon rang with antigovernment chants and smoldered with burning roadblocks as thousands of people around the country protested against their leaders on Friday, the second day in a row that frustrations over chronic corruption and dysfunction spilled into the streets.

Protesters massed outside the government palace in downtown Beirut and marched on the presidential palace in Baabda, blocked the airport road and burned posters of politicians from Tripoli in the north to Tyre in the south — Christians, Muslims and religious minorities alike. In downtown Beirut, trucks loaded with huge speakers blasted upbeat patriotic songs and the national anthem. “Revolution! Revolution!” people chanted. “The people want the fall of the regime.”

Families came with children; the elderly protested alongside the young. “It’s the first time it’s not politicized,” said Mariella Franjieh, 28, a pharmaceutical company employee from northern Lebanon. “This time it’s all of Lebanon.” […]

Hariri has given his deeply divided coalition until Monday evening to commit to a reform package aimed at shoring up the government’s finances and securing the disbursement of desperately needed economic assistance from donors.

Protesters in Beirut’s Riad al-Solh square, a stone’s throw away from the seat of government, celebrated as news of the resignations broke.

But they quickly began chanting to demand further resignations, using a slogan conventionally chanted at football matches: „The first shot went in, where is the second?“