After a week of protests at the border between BiH and Croatia, people who have been in BiH for months are still trapped in inadequate living conditions, and they haven’t been able to continue their journey towards the European Union.

Namely, on Monday, October 22, between 100 and 200 people walked from Cazin to Bihać and then to the border crossing Izačić.

In the evening hours, the police cordon stopped the movement. All night between Monday and Tuesday they were on the open near the border crossing Izačići, along the border between Bosnia and Herzegovina and Croatia. The locals of Izačići welcomed them with food and jackets. Among the refugees, there was a great number of women and children who were accommodated in the temporary center at the „Sedra“ hotel near Cazin, that is intended to accommodate families with young children.

The next day, refugees went to the border crossing Maljevac-Velika Kladuša requesting the opening of borders , but a police cordon was established. The refugees spent the night on the border, and they tried to cross over again on Wednesday. They then broke the cordon of the Bosnian-Herzegovinian police and came just a few meters from the borderline between Croatia and Bosnia and Herzegovina, where the Croatian police set up the cordon, and later the fence. That was the day when there was a close contact between police and refugees, which was debated by usage of different and contradictory information. According to some sources, while police in B&H were dealing with the situation, some people began throwing stones at Croatian policemen, and Croatian policemen used a tear gas.

Several people were injured and one of the protesters tried to harm himself.

On Thursday morning at the border crossing Maljevac near Velika Kladuša, according to some estimates, there were around 125 refugees. Since the police had somehow tolerated movement to the border area outside the encircled area, some of the children approached the cameras that followed the protest almost exclusively from the distance, pointing to banners with messages sent to the European Union and the international community and calling them to „Open borders“

The next day, around two hundred people were protesting at the border, including a significant number of families. Many of them, isolated and exposed to external pressures, were on a protest site, day and night without organized basic infrastructure support, access to electricity, food distribution, mobile toilets, etc. As pointed out in the No Name Kitchen report.

„Refugees were trying to get protesters from across Bosnia and Herzegovina, including Sarajevo, Bihać, and Mostar. Many had a problem getting to Velika Kladuša because local authorities in some cases prevented their entry into public buses or stopped public transport to Velika Kladuša. „Protesters at the border said that the following day was a peaceful demonstration and that they did not want to cross the border illegally and risk their lives, as well as their only chance for the shift of the EU’s refugee policy

Because of the closed border, tensions in the Great Kladuša itself appeared. So on Sunday, 28 October, the Association of Businessmen Velika Kladuša organized a peaceful protest where a couple of hundred locals gathered. They argued that the protest was not directed against refugees and did not want them to be instrumentalized by the media and others, and urged the authorities to solve the problem and to open the border to allow free movement of people and goods.

This is not the first protest organized by the locals. They also protested on Saturday, October 20th, when about two thousand people gathered in Bihać due to the increased arrival of refugees from the beginning of the year in the Una-Sana Canton; they demanded more decisive engagement of state authorities. According to data from the county-level of B&H, in that part of B&H between 100 and 150 people comes every day, and they are placed in inadequate conditions, with no perspective for improving or lifting their status. Police claims they record a steady rise in the number of people. Protesters added that the Ministry of Security of B&H requested measures that would aim to provide equal care for refugees in all parts of the country as this is not the only case for the Una-Sana Canton. In the speeches, it was felt that this was not a protest against refugees, but against authorities who did nothing to create conditions for them and to provide citizens with security. During the day, the protest was more peaceful, but in the evening the situation became more serious because then the residents of Bihać blocked the bus station and partly the main road and some even stopped cars and sought refugees. You can take a look at Al Jazeera about what was happening.

The situation in B&H is a consequence of poor migration policies of the EU; due to it both refugees which are trapped in the status quo position, and the local population of a country that has a difficult economic situation suffer. The border crossing of Velika Kladuša – Maljevac was closed for traffic, because of, as the police claim, the protests of refugees near this border crossing.

Although the refugees eventually moved away from the border and moved from the main access road, the Croatian police continued to block the border, and could technically open it for traffic. This did not only extend the agony of refugees who protested at the border but rather caused direct economic damage to the residents of Velika Kladuša. On Tuesday, October 30, a week later, after alleged negotiations, the police removed protesters from the border at the Miral facility in Velika Kladuša.

Also, the Center for Protection and Assistance to Asylum Seekers from Serbia states that last month there were more than a hundred refugees at the border crossing Batrovci (Serbia), and among them, there were families with children. Most of them were from Adaševac camp, and a smaller number from Principovc.

President Kolinda Grabar-Kitarović said that a session of the National Security Council should be convened as a result of the situation regarding the protest at the Maljevac border crossing, and when asked about the situation at the border, Prime Minister Plenkovic said:

„Minister Božinović and I just talked about this. This is about the border crossing of Maljevac. The forces and border police have been strengthened and a special police force was sent. The Republic of Croatia, as it has been so far, protects Croatian borders from illegal entry and immigration, respecting all elements of border law, humanitarian law, and international law.“ For two years the Welcome Initiative! And other organizations and institutions have been warning about the violations of some of the elements of these rights, such as the right to access to international protection or the possibility to claim asylum or to violence at the borders of the Republic of Croatia, and there were no convictions from the Government of the Republic of Croatia and the Ministry of Interior, but only routinely disclaiming the responsibility. That is why we are asking, now that we have finally adopted the need to respect the borders, humanitarian and international law, when will it start to shift from words to actions?

At last, It is important to address the way many Croatian media, with their superficial and sensationalist way of reporting, the lack of information and the consequent spread of disinformation, spread the hatred. The answer to one such article that tries to spread the fear of refugees has been written by the Jesuit Refugee Service.

It is important to emphasize that while many media are trying to put the local community in opposition to the refugees, residentsof Velika Kladuša have been helping refugees for months, which is rarely addressed. The protest of refugees at the border was reported from a distance, without contact with people, which further dehumanized them and refugees were described as a homogenous, threatening mass of illegal migrants from which we have to be defended using all means. On Maljevac there was a protest, not an attack on the border. Such narratives created by certain authorities and politicians, and the media took over without further questioning, and that can be very dangerous. Finally, the refugees and residents of Velika Kladuša wanted the same – freedom of movement and the opening of the border – a right which the refugees have unfortunately still not achieved.

Therefore, requests should be directed towards the authorities, especially those in Croatia and the EU, and not towards each other. The problem is not the refugees nor the local community – but the restrictive and repressive migration policy of the European Union which violates fundamental human rights. In this, we must play our role, especially in Croatia, whether we are organizations or individuals. What happens to refugees today, but also to volunteers/activists with the ever-increasing criminalization of assistance and police pressures, can happen to anyone if we agree to normalization this situation. 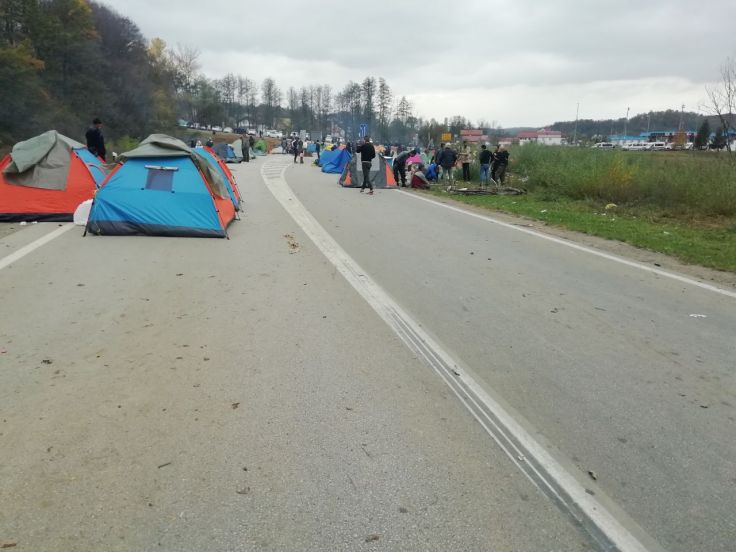 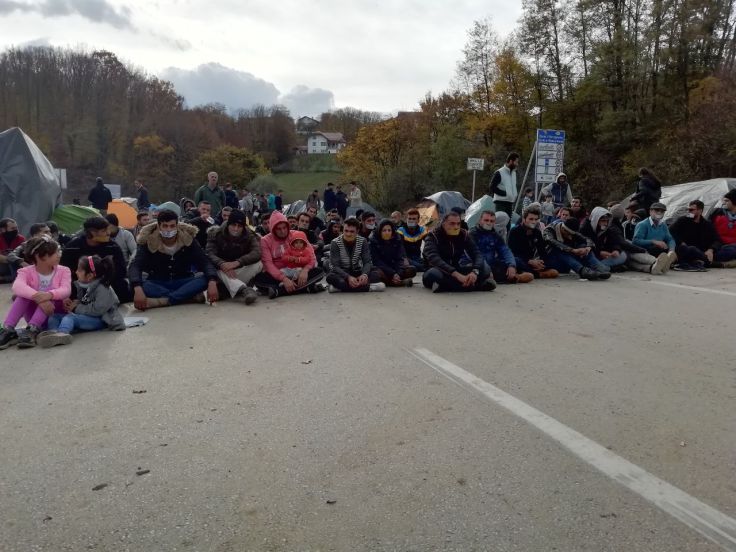 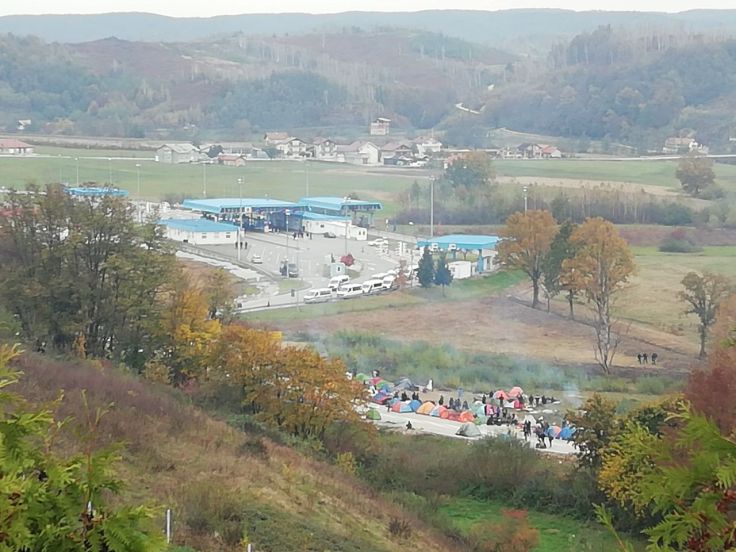