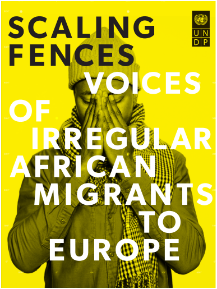 The Scaling Fences: Voices of Irregular African Migrants to Europe report presents the results of an extensive study exploring the perspectives and experiences of 1970 individuals who migrated through irregular routes from Africa to Europe, originating from 39 African countries.

Its aim is to contribute to a better understanding of the relationship between migration and development. The Scaling Fences report is the second major review of contemporary development issues affecting Africa to be published by UNDP’s Regional Bureau for Africa.