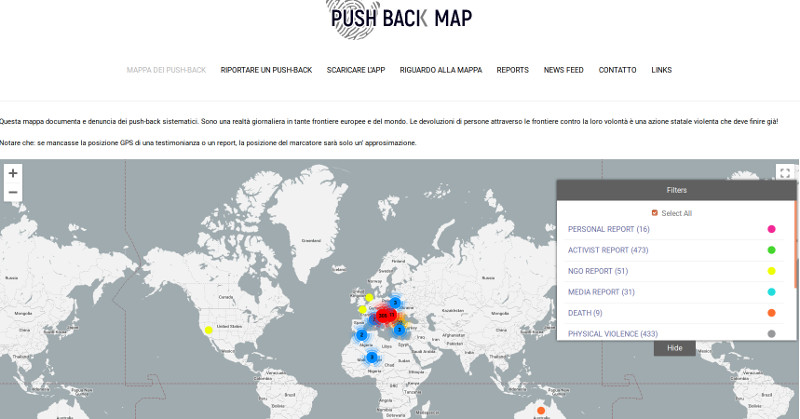 Currently we are witnessing an increase in institutional violence across Europe. At the EU’s borders expulsions, direct deportations, readmissions and other forms of forced returns across borders are happening on a daily basis. These violent practices are called push-backs. They are a systematic institutionalised technique used to suppress movement across borders.

With our newly developed online tool Push-back Map we aim to map, document, visualise and denounce these practices.

We were walking in the forest before we reached the bus station […] I saw a police patrol, they were searching the area and [we] turned around from the police and went down into the forest. […] They never gave us the chance to ask for [asylum]… the officers started to beat [me] and kick with their shoes.

Account of a push back from Croatia to Bosnia by an Iraqi minor, January 21, 2019, borderviolence.eu

The Push-back Map is a collective space of resistance against the EU border control regime. It aims to visualise the struggles of crossing, challenging and fighting state sovereignty. Mapping push-backs means therefore also mapping resistance, mapping the never ending movements across and against borders! This map intends to document this continuous struggle collectively and wants to give people a tool to report experienced or witnessed push-backs keeping the struggle up!

The map was developed by a collective of activists in the South East of Europe, where push-backs are rampant. However, it does not have any geographical limitations, because push-backs are a global phenomenon and must be fought transnationally. We hope to provide a platform to aid this grassroots political organising across borders.

The Push-back Map begins documenting with the closure of the Balkan Corridor in March 2016. Although push-backs have been a normalised practices before, we believe this date symbolises the re-enforcement of this brutal practice.

We are tired of talking about dehumanised, depoliticised victims who, supposedly, cannot speak for themselves, we want to talk with and to people which do not have any other choice than challenging those borders. We want to collect, expose and remember what happens everyday at the European borders.

I try again and if it doesn’t work again, I lost my country, I don’t care.

Young man from Syria after being pushed back from Bosnia to Montenegro, May 9, 2019, borderviolence.eu