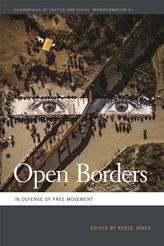 „As the ‘West’ is closing its borders, Reece Jones and his team of contributors offer an indispensable critique, pointing to an open-borders world that humanity should aspire to. This book shows a path forward in these backward times.“

„Comprising contributions from key scholars, activists and activist-scholars, this fantastic volume bridges theory and practice. It provides intellectual heft and inspirational case studies to demonstrate the justice and possibility of a world of open borders.“

Bridget Anderson, author of Us and Them? The Dangerous Politics of Immigration Control

Border control continues to be a highly contested and politically charged subject around the world. This collection of essays challenges reactionary nationalism by making the positive case for the benefits of free movement for countries on both ends of the exchange. Open Borders counters the knee-jerk reaction to build walls and close borders by arguing that there is not a moral, legal, philosophical, or economic case for limiting the movement of human beings at borders. The volume brings together essays by theorists in anthropology, geography, international relations, and other fields who argue for open borders with writings by activists who are working to make safe passage a reality on the ground. It puts forward a clear, concise, and convincing case for a world without movement restrictions at borders.

The essays in the first part of the volume make a theoretical case for free movement by analyzing philosophical, legal, and moral arguments for opening borders. In doing so, they articulate a sustained critique of the dominant idea that states should favor the rights of their own citizens over the rights of all human beings. The second part sketches out the current situation in the European Union, in states that have erected border walls, in states that have adopted a policy of inclusion such as Germany and Uganda, and elsewhere in the world to demonstrate the consequences of the current regime of movement restrictions at borders. The third part creates a dialogue between theorists and activists, examining the work of Calais Migrant Solidarity, No Borders Morocco, activists in sanctuary cities, and others who contest border restrictions on the ground.