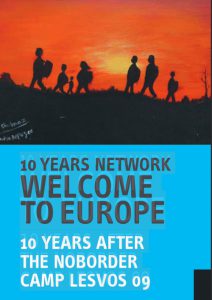 For us it was the most inspiring Noborder camp, which we ever have organized. In Lesvos in late summer 2009 about 400 noborder activists from various countries met together with hundreds of refugees and migrants, who just had arrived from Turkey with small boats on the coasts of this Greek island. Some weeks before already strong protests started in the detention prison „Pagani“, at the margin of the capital city of Mytilene. Ongoing rebellions from inside and demonstrations and scandalization from outside finally led to the closure off this „hell of Dantes Inferno“, an important success against the EU policy of determent. During the noborder camp an info point was established at the port of Mytilene, which became a crucial and vivid meeting point for a week of common fights for freedom of movement.In the middle of these struggles the idea of Welcome to Europe (w2eu) was born: to build daily structures and to provide useful multilingual information to empower and to support refugees and migrants in transit for their right to move to their desired destination. We tried to build links to the various countries of arrival and destination and within the years the network grew with every friend who arrived somewhere.

In September 2019 it is 10 years ago and we look back to an impressive common history of coming together and projects, of protest and of commemoration, and last not least of innumerable friendships, which spread with and through w2eu all over Europe.

In this brochure we want to highlight some milestones of our network during this decade. We assembled a mixture of chronology and documentation, of personal stories and reports, of quotations and photos. We hope it will offer an interesting and exciting review on the last years.

Against the background of the ongoing roll back of the deathly EU border regime this booklet is also a promise for the future: we will tear down these borders and will go on with our struggle until freedom of movement and equal rights will be reality for everybody.