Afghanistan demanded a clarification on Tuesday of President Trump’s comments a day earlier that he could have had the country “wiped off the face of the earth” but did not “want to kill 10 million people.”

In a sharply worded statement, the government of President Ashraf Ghani noted that Afghanistan expected its relationship with the United States to be “grounded on common interests and mutual respect.”

Mr. Trump made the comments on Monday during an Oval Office meeting with Prime Minister Imran Khan of Pakistan. The president said he was referring to prepared military plans for Afghanistan, adding, “I could win that war in a week.” 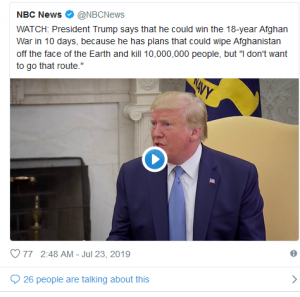 Recently, at a confirmation hearing before the Senate Armed Services Committee, Mark Esper, President Trump’s nominee to be the new secretary of defense, faced questioning on all sorts of subjects, including on his past position as the top Washington lobbyist for weapons-maker Raytheon and on Turkey’s purchase of a Russian missile system. Strangely enough, however, one subject remained missing in action. Not a single senator asked the future Pentagon chief a single question about America’s never-ending war on terror, specifically its almost 18-year-old war in Afghanistan.
If those senators didn’t have the Afghan War in mind, however, the same wasn’t true of the president of the United States who, just the other day, claimed that he had “plans” yet to be put into action for winning the Afghan war “in a week.” As he put it, with Pakistani Prime Minister Imran Khan standing at his side in the Oval Office, “I just don’t want to kill 10 million people… Afghanistan would be wiped off the face of the Earth… It would be gone. It would be over in — literally in ten days. And I don’t want to do that. I don’t want to go that route.”
I might have a few questions for future Pentagon chief Mark Esper about that “plan,” I think. Then again, I’d also have a question or two for the authors of a recent Pentagon report suggesting that, “even if a successful political settlement with the Taliban emerges from ongoing talks” in Doha, capital of Qatar, between U.S. Special Representative for Afghanistan Reconciliation Zalmay Khalilzad and Taliban leaders, the U.S. military should still “maintain a robust [counter-terrorism] CT capability for the foreseeable future” in Afghanistan. In other words, when it comes to the Pentagon, there’s no such thing as over, ever. This was a point emphasized by General Mark Milley, the Trump administration’s nominee to be the next chairman of the Joint Chiefs of Staff in his own recent Senate hearings. He testified then that, peace or no peace, it would be a “strategic mistake” to withdraw American troops from that land anytime in the near future.