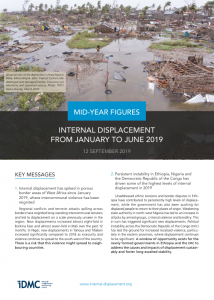 IDMC’s mid-year figures reveal the most significant new internal displacements associated with conflict, violence and disasters around the world between January and June 2019. The report serves as an important temperature gauge of global displacement halfway through the year, looking ahead to the trends and patterns expected in the months to come.

Border areas between central Mali, northern Burkina Faso and south-western Niger have been plagued by violence since 2018. The violence has its roots in the activities of several local but globally oriented jihadist groups that have spent years laying the ground-work for armed insurgencies that are now wreaking havoc across the three countries.Some of the disputes involve access to land and water, but many attacks are part of efforts to root out individuals linked to extremist groups or to take revenge for previous attacks. Jihadist militants contained in northern Mali in 2012 have gained ground in central areas of the country and across the border in Burkina Faso and Niger by recruiting from the Fulani community, pastoralists who have been marginal-ised by governments and development programmes that favour agriculture.29This situation has spawned a growing number of self-defence militias, and as the violence spirals out of control, armed groups have burned homes, destroyed the livelihoods of whole communities, laid siege to villages and perpetrated severe human rights violations. Many of those displaced are left traumatised, and governments and humanitarian organisations struggle to meet their urgent needs for shelter, food, water and healthcare.More than 140,000 new displace-ments were recorded in Mali in the first half of 2019, a higher figure than for the whole of 2018, and about 173,000 were recorded in Burkina Faso, the highest figure ever reported. The violence has also spilled over into the Tahoua and Tillaberi regions of south-west Niger, triggering an increase in displacement. Across the country as a whole, 42,000 new displacements were recorded between January and June, which represents more than 80 per cent of the total for the whole of 2018. The government passed a law in December 2018 which is intended to protect the country’s displaced people. As the security situation deteriorates in the three countries’ border areas, they face the difficult task of providing those displaced with adequate protec-tion and assistance. The ultimate aim must be to ensure that they are able to achieve durable solutions to their displacement, but as of today most are afraid to return home because of prev-alent insecurity and scarce resources. Instead, they struggle to get by in over-stretched host communities